You will find here a list of demos that have marked the era of the Atari ST, seen under the angle of overscan, ie all screens that led to progress in these techniques on the ST :

To open a screen in fullscreen, a button is available from the cog icon at the bottom right of the modal window… 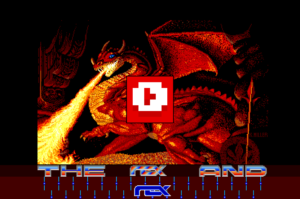 by Alyssa / The Exceptions (TEX), in the Super Neo Demo Show, released in september 1987.

It was the first demo with the lower border removed.

To open the lower border, the screen frequency has to be switched to 60 Hz at the end of the 199th line, during a short period of time. The ST then reads nearly 47 additional lines of the screen memory. Without this fundamental idea, no fullscreen or sync-scrolling would be possible on the ST !This technique was invented by Alyssa : he previously wrote an intro that showed graphics in the lower border, but never released his screen to public. The Exceptions used his trick in this slideshow, and revealed this secret in the B.I.G. Demo at the end of the longest scrolltext ever written. 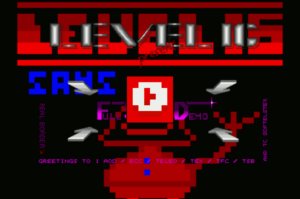 A fake fullscreen effect, solely based on sync-locked background color change, that had many people scratching their heads at this time (fullscreen scrolling at full framerate !)

But it was a milestone of ST programming, it was the first time ever a coder synchronized with the electron ray, opening the way to following developments.

by The Exceptions (TEX), in the Amiga demo, released in march 1988.

It was the first time the right border was removed.

To open the right border, a completely new technique of programming needs to be used : to achieve it, you need to be fully synchronized with the monitor’s electron beam, and to switch the screen frequency to 60 Hz exactly at the extreme right of the screen, and back to 50 Hz immediately after.

This frequency switch must occur at exactly the same position, for every screen line, so this takes a lot of processor time.

Opening the right border brings about 41 additional pixels on each line of the screen. 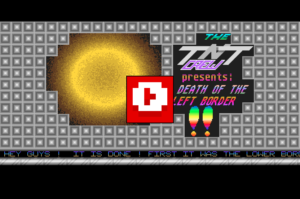 by TNT Crew, in Death Of The Left Border demo, released in 1988.

It was the first demo with the left border removed.

For a long time it was considered impossible to open the left border, because the trick with the 60 Hz switch did not work in the left border. But TNT Crew managed to do it, by switching to high resolution (monochrome) at the start of the line, and then to go back to low resolution.

Opening the left border brings 52 additional pixels on each line of the screen. Combined with right border overscan, you can have 413 pixels of graphics in low resolution !

This very early left/right border routine did not have stabilisation switches at the end of each line (discovered afterwards), thus on some ST configurations you can experience a shifting of bitplanes.

This is the oldest demo found with the upper border removed (but perhaps not the first ?)

The technique to open the upper border, is basically the same that the one to open the lower border : the screen frequency has to be switched precisely 29 lines above the usual beginning of the screen, to 60 Hz during a short period of time then back to 50 Hz. The ST then displays these 29 additional lines before the regular screen.

The very early upper border routines, as found in this demo, have a few skewed lines at the top, and a distortion can be seen on real hardware. 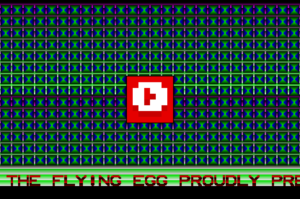 by The Flying Egg / Omega, in the Omega demo, released in december 1988.

Combining all the discoveries previously made, this demo features for the fist time in ST history, the very first fullscreen, removing the 4 borders simultaneously !

With all the borders removed, the visual area reach about 413×276 pixels, compared to the 320×200 in standard low resolution ! But the downside, the screen memory is almost twice as big !

Unfortunately this fullscreen did not have stabilisation switches at the end of the lines, and the routine is very sensitive and only works on some ST configurations, under certain conditions. So it can be difficult to see it on real hardware. 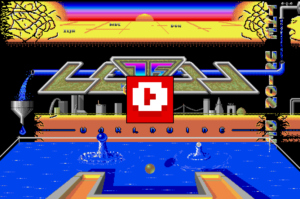 It was the first stable fullscreen, the first screen that displayed no border at all, and worked reliably on all STs ! The demo-coders made the impossible possible.

To achieve this, this demo uses stabilisation switches at the end the lines (sometimes mistakenly called « closing the right border ») : an additionnal resolution switch that produces a shifter reset, which is needed to clear the last word contained in the shifter before the next line, and avoids the shifting of bitplanes as seen in earlier routines.

Trivia : The scroll text from this screen is shared with the Union main-menu. 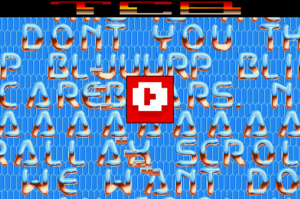 Probably the most technically important breakthrough on the ST. The sync-scrolling was invented by The Carebears, Omega and ST Connexion more or less simultaneously, but it appeared first in this demo. The name comes from « synchro » scrolling, because the method use perfect synchro with electron beam. It is also called « hardscroll ».

The Atari STF has no hardware scrolling capabilities. It can only set the screen address on a multiple of 256 bytes address, because it has no low-byte video address register.

While working on overscans, the coders soon discovered that if the mixed several line length on the same screen, the screen appeared shifted to the left. A normal line has a length of 160 bytes, a left overscan is 186 bytes, a right overscan is 204 bytes, a complete overscan is 230 bytes. With 20 lines (line 0 to line 19) and combining the several available sizes you can emulate the low-byte video address register for the screen starting on line 20. This is what is called sync-scroll… hardware scrolling on the ST!

During these top lines the screen is showing a distorted bitmap, so the colors are simply kept black during that period. Latest sync-scroll routines use less scanlines thanks to new line lengths, discovered later. 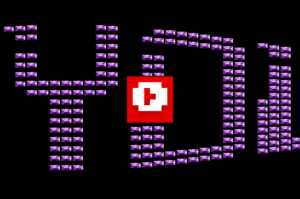 by Alien / ST Connexion, in the Punish Your Machine demo, released in november 1991.

This screen is a technical masterpiece applying “4-bit sync-scrolling” for the first and only time on the ST.

This technique allows to move the whole screen left and right by increments of 4 pixels.

To achieve it on an ST, you have to switch to medium resolution after the passage to high resolution used to open the the left border, then wait 0-4-8 or 12 cycles before switching back to low resolution. This affects the way the shifter works, and delays the displaying of the picture by a multiple of 500 nanoseconds, which results in an effective shift in the picture.

This method does not work on some STE. 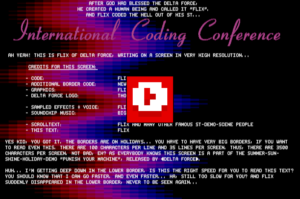 by Flix / Delta Force, in the Punish Your Machine demo, released in november 1991.

A fullscreen in medium resolution, for the first and only time on an ST, reaching a resolution that was thought to be absolutely unfeasible on this computer : 800 x 262 x 4 colors, instead of the usual 640×200×4 colors

Flix realized during ICC#2 that, as pointed out by others experts, this fullscreen was not working on all STs, it was not stable enough. 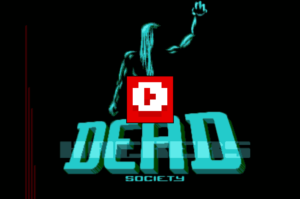 A simple STE trick to gain an extra 16 pixels on the left border, relying on the prefetch of the STE hardware scroller registers.

The screen width increases from 320 to 336 pixels. 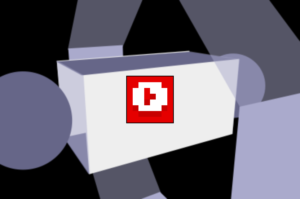 by Ziggy Stardust / Overlanders, in the Froggies Over The Fence demo, released in 1993.

The first screen with a real 3D routine in fullscreen.

In a classical fullscreen, you need to be fully synchronized with the monitor’s electron beam, and to switch resolution and screen frequency at precise spots, waiting for the next switch with a bunch of nops (or a piece of code with the same precise execution time).

With this routine, the program does not have to be synchronous with the electron beam. A timer is set to open the next border, therefore in the code running during the fullscreen does not need to be cycle-accurate, and you can use multiplications or divisions. The disadvantage of this method is that the border removal takes up to 50% of the processor time because you need to sync for every screen line.

Trivia : After seeing a preview version of this demo during ICC #2, Flix of Delta Force also worked on this technique and eventually had a working screen, but it was never released. In the meantime, the Overlanders have released the demo, therefore we can say that this technique was invented and mastered by Ziggy Stardust. 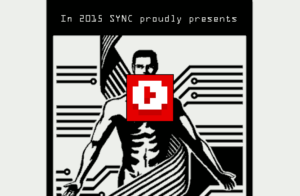 Probably the most technically important breakthrough on the ST in many years.

When converting all these screens to Codef, I had some problems with the following technical issues :

If anyone have corrections or additions, please contact me